Anybody who has been watching the Kashmir tragedy unfold on live television will know who’s the aggressor, who’s on the defensive. The mobs are running riot, provoking, attacking and bullying the police and armed forces. The latter are withdrawing into their shells, trying to defend themselves as best as they can. If we still hear about civilian deaths daily, it’s not too difficult to imagine why: when the attackers get too close or threatening, the men in uniform fire, and someone, sometimes drops dead. It’s not really about a trigger-happy force. 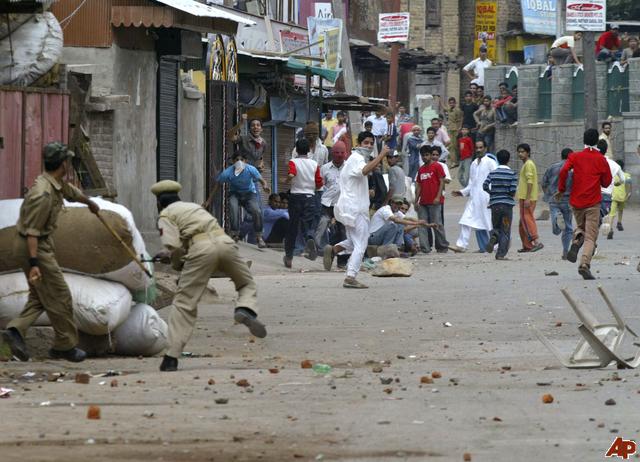 This is not the time to demoralise our men in uniform. They are fighting the nation’s battles in extremely adverse conditions. Our politicians keep screwing up continuously, and we then send in the forces to bring back some semblance of order. But the human rights rabble-rousers would like us to believe that our armed forces are little more than criminals. This is completely unacceptable.

One is not trying to defend the indefensible. One is not saying our armed forces should be let loose on a hapless civilian population to rape and murder at will. There is more rape and murder in lawless Delhi than in Kashmir. But we want to paint the armed forces as the villains of Kashmir. Libertarians need to think about the rights of uniformed Indians as much as civilians.

Let’s be clear why the armed forces are there in the first place. Kashmir is where embattled secularism is trying to hold its own against sectarianism. We are not talking here of the rights and wrongs of what happened in 1947-48, when the Hindu ruler of Kashmir signed away his Muslim majority state’s right to secede. The rules of legal secession were broken by both Pakistan and India, and revisiting the past serves no purpose today.

We are now in the 21st century, where the biggest threat to peace is the prospect of religious bigotry and the emergence of wild-eyed young men salivating at the prospect of cosmic war and suicidal jehad. As Reza Aslan, an Iranian writer and author of How To Win a Cosmic War, writes: “A cosmic war partitions the world into black and white, good and evil, us and them. In such a war there is no middle ground; everyone must choose a side.”

No nation can win a cosmic war of the kind the jehadis are forcing down our throats in Kashmir. When religion and god are being conscripted on one side, we are no longer fighting for ordinary issues like jobs or education. Armies and policemen are ill-equipped to fight cosmic wars. They try to do their best in trying circumstances.

What once started as a move to protect Kashmir’s unique identity has now metamorphosed into a fight for Islam. No Hindu or Buddhist Kashmiri is rooting for azadi. Kashmiriyat has given way to Islamiyat – which is what the Pakistanis want it to be, and the valley’s citizens are willy-nilly being dragged into it. This is why the valley was ethnically cleansed and why there are no voices opposing azadi there anymore.

True secularists have to fight this kind of sectarianism by shifting the focus to secular issues. We have to rebuild the Kashmiri economy, so that Kashmiris – temporarily carried away by emotive calls for Muslim azadi – realise that they are destroying their own syncretic culture. Aslan’s advice to those who are fighting the jehadis is simple: don’t engage with them. Focus on everyday issues and forget the cosmic angle completely. Sheikh Abdullah chose India over Pakistan and converted his Muslim Conference into National Conference precisely because he saw that Kashmiriyat is safer in pluralist India than in Islamic Pakistan. While politicians, including Nehru and Rajiv, have repeatedly messed things up for narrow electoral gains, India has kept the promise of allowing Kashmiris greater rights than non-Kashmiris in that state. No Indian can own land or settle permanently in Kashmir, thus guaranteeing Kashmiris their ethnic majority and exclusivity. We could have allowed Indians from outside Kashmir to emigrate to Kashmir and change the ethnic composition, like Israel did in Palestine, but we didn’t.

It is also important to question liberals who see the army and police as an occupying force in Kashmir. But this is missing the complexity of the situation. When guarding one VIP takes scores of Black Cats, why is it difficult to believe that keeping the peace in one restive state can take a large army?

It’s also worth remembering what laws we want to write into our statute books to prevent communalism in other states. We want to give the Centre the right to intervene if communal forces get out of hand anywhere. We want the Centre to send in troops if a Gujarat happens again. But a Gujarat is what is happening in Kashmir and we don’t want to accept the analogy. How long can we afford to not face reality?

No comments to show.